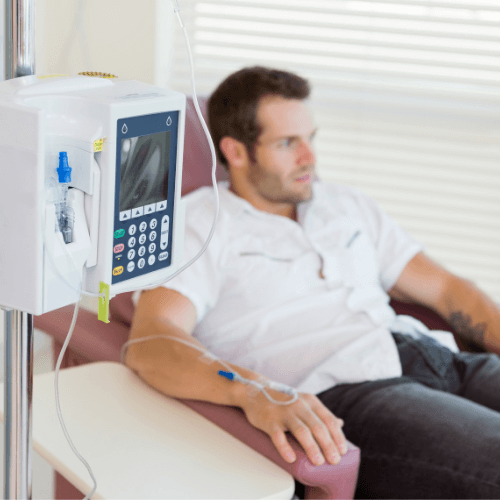 WHAT IS IV VITAMIN THERAPY

IV drip therapy is an effective way to deliver nutrients, vitamins, and medications via an intravenous drip to the body because this technique bypasses the digestive system, supplements are administered directly into the bloodstream, making nutrients available for immediate use.

We have a relaxing atmosphere where we provide our IV therapy. This all is part of our holistic approach to the health of our patients. Our trained staff easily gets your IV started and then you can listen to music, watch videos, surf the net, or even take a nap.

It’s important to ensure you’re getting the treatment in a safe, clean environment. Be sure the IV is administered by a trained professional using only sterile needles.

HOW LONG IS IV VITAMIN TREATMENTS

Procedures vary from 45 – 60 minutes with a consultation.

This drip helps you bounce right back and get back your PRIME!

Benefits of the Vibranium Drip:

Joint pain, back pain or arthritis pain can range from mildly irritating to debilitating. It may go away after a few weeks (acute), or last for several weeks or months (chronic). Even short-term pain, inflammation and swelling can affect your quality of life. Whatever the cause of your pain, you can usually manage it with medication, physical therapy, or alternative treatments.

Benefits of IV Therapy for Joint Pain, Back Pain and Arthritis:

Some people have lower supplies of iron in their blood than others. These groups include:

A variety of medical reasons can cause low iron levels, so a doctor will also check someone’s blood for the types of iron present, to ensure that it is the lack of iron that is causing the anemia. If so, the condition is known as iron-deficiency anemia. An iron infusion may be given if a person’s blood counts are so low that taking iron supplements or increasing their daily intake of iron-containing foods would be ineffective or too slow in increasing their iron levels.

Some people, such as those with inflammatory bowel disease, cannot take an oral iron supplement and may benefit from an iron infusion.

What are the symptoms of iron deficiency?

Vitamin C assist with shortening the duration of illness by elevating the action of the immune system. Vitamin C helps to eliminate the pathogenic bacteria building up in your body during illness. Vitamin C also helps to protect the body from airborne illnesses while traveling. While vitamin C is combating infection and free-radicals, Zinc helps to repress dormant microbes in your body. IV doses of vitamin C and Zinc have been clinically proven to shorten recovery time and prevent future infections.

Glutathione is an antioxidant produced in your cells. It’s comprised largely of three amino acids: glutamine, glycine, and cysteine.

Health, age and lifestyle factors like poor nutrition, malnutrition, stress and environmental toxins can reduce glutathione levels in the body.

When the body has its building blocks, it works better.

Weight loss drip gives your body its building blocks it needs, helping you lose weight. When your body works better, you can lose weight more easily.

At times people go to extremes to obtain beautiful, soft, glowing skin and protection from the sun. Some markets offer creams, capsules, and even deadly poisons to lighten their skin tone.

Vitamin C, Magnesium, Trace Minerals, Zinc, B Complex, B1, B6, B12. Selenium, Thiamine

Jet lag can other bothersome symptoms that persist for days or even weeks after a flight. Whether you’re travelling for business or pleasure, jet lag can negatively impact your trip.

Common causes of insomnia include stress, an irregular sleep schedule, poor sleeping habits, mental health disorders like anxiety and depression, physical illnesses and pain, medications, neurological problems, and specific sleep disorders. If left unchecked, it can cause havoc on your immune system and overall wellbeing.

Athletes and or individuals with demanding exercise routines will lose a percentage of body weight through water loss. When their sweat loss exceeds fluid intake, they become dehydrated during activity. Dehydration of 1 to 2% of body weight begins to compromise physiologic function and negatively influences performance.

Your body responds to serious work and relationship stress the same way, which could lead to burnout and exhaustion.

Headache infusion therapy is an alternative treatment option for patients suffering from migraines, cluster headaches or tention headaches. Infusion therapy refers to the intravenous (IV) administration of medications to treat and manage the symptoms of headache.

Sometimes over the counter and prescription pain medications provide little relief. In these situations, there are intravenous medication combinations that can be administered in doctors’ offices that are effective and cost efficient.

Stress is a big contributing factor to chronic disease. Stress can be inevitable, but you no longer need to suffer through the symptoms of anxiety. The stress relief treatment is specifically formulated to reduce the activity of neurons in the brain and nervous system and help you cope better with every day or work-related stress.

Vitamin C, Zinc, Selenium, Thiamine, Lysine, Vitamin B6, B12 and B Complex

Zinc, Selenium, Magnesium, Lysine, Glutathione, B12 and B Complex

Please take note of the items below, before booking your consultation.